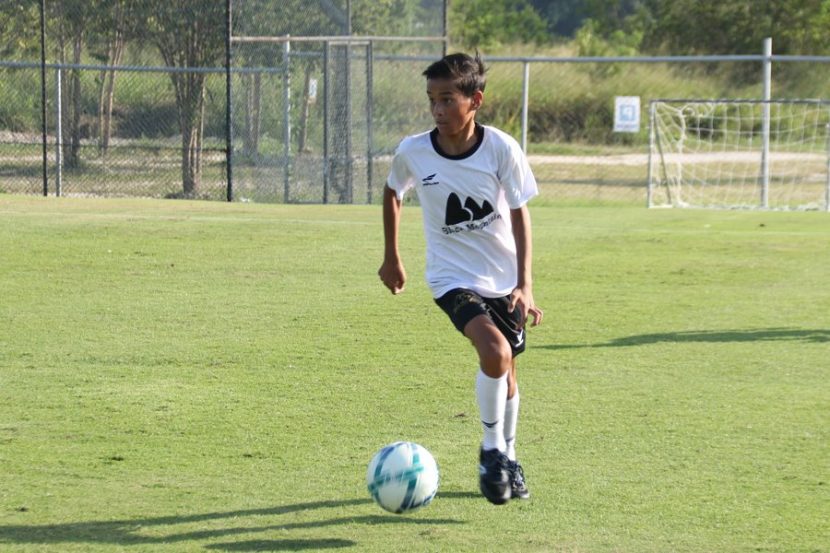 After scoring ten goals during the week  confidence was high among the players in the Under 14 group. With a very similar squad to the one that  beat HHIS on Wednesday the team got off to a flying start against Hua Hin Junior.

Central midfielder Julian scored the opening goal of the game only for HHJ to equalize when a free kick wasn’t dealt with by the defenders and was bundled home. The second goal followed soon after with Julian, who scored with a rabona on Wednesday, using the same technique to set up Simon (pictured).

Central defender Boss added a third with the aid of a couple of deflections but Hua Hin Junior scored from another free kick, this one finding the top corner from a position well inside their own half. But with Bobby (below) seeing a lot of the ball and linking up to good effect with Simon the home side always looked a threat going forwards. 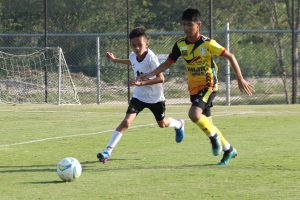 Simon, in particular, showed some silky footwork to bamboozle the defenders and he and Bobby had the confidence and understanding to pick each other out even in the tightest of situations. The former grabbed his fifth goal in two games with a long range effort at the end of the half.

At half time every single BMHHFA outfield player was changed but the replacements were not found wanting. Gluay dominated the central midfield and saw a cross deflected in by the defender early in the half before grabbing his first goal of the game when a shot from striker Bam fell kindly for him and he converted emphatically. 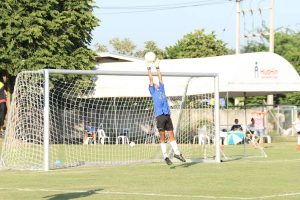 Hua Hin Junior had their moments and found the net from close range. They would have scored more but for a sensational goalkeeping performance from Wave (above) who threw himself around acrobatically to tip efforts over the bar or around the post.

He was also out rapidly to throw himself at the feet of the opposition strikers ans snuff out numerous attacks. The goalkeeper prevented Hua Hin Junior from getting a foothold in the match and, at the opposite end, Gluay (below) added two more. 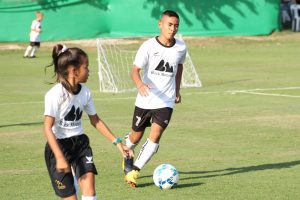 Having completed a hat trick he was immediately taken off to be replaced by debutant Bank, with Benz pushing up into central midfield. The team lost its shape a little after that but a five goal cushion was always going to be comfortable.

Simon has five goals in 40 minutes this week while Gluay has scored four in slightly less time. Julian is still the top scorer with seven goals in six friendly games but the new players have settled in rapidly and the team is playing some lovely football.