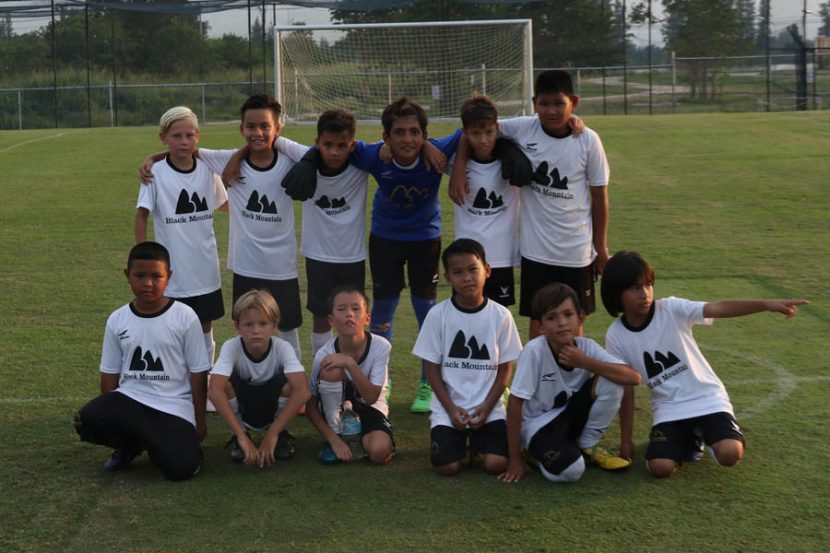 BMHHFA Under 10s were well beaten by Hua Hin City in their first match last month but put in a much better performance against Burexnong this afternoon. The team created numerous chances but looked to be on course for a second straight defeat until Alex popped up with a last gasp equalizer.

Burexnong scored straight from the kick off with a powerful shot that gave goalkeeper Sam no chance. It wasn’t the ideal start but BMHHFA had plenty of possession and got the ball into dangerous areas with William (below) and Nick on the flanks showing a real willingness to run with the ball and attack the defenders. 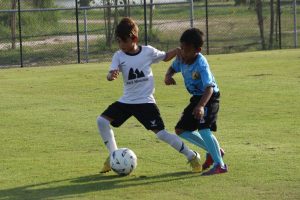 Burexnong added a second following a mix up in the middle and would have scored more were it not for Sam, in goal, who was putting in the performance of a lifetime and made a series of superb saves. He was powerless to prevent Burexnong adding a third but BMHHFA should have pulled one back when Nick, on the right wing driblled to the touchline and then played the perfect cut back to substitute Michael (below), who couldn’t keep his shot down.

It was 3-0 at half time but the coaches were very happy with how the team had played and in the second stanza luck was on BMHHFA’s side. Nick and William were causing havoc with their direct running down the flanks while Alex was a rock at the back and showed some silky touches in possession, bringing the ball out of defence and starting attacks. 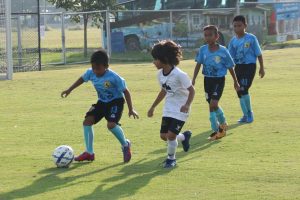 Nick (below) finally got the goal that his performance deserved and he soon added a second. BMHHFA were creating havoc on the counter attack and Alex was very unfortunate to see a shot rebound back off the crossbar after a brilliant passing move.

An equalizer looked on the cards but it was Burexnong who struck next. Sam made a brilliant save, diving to his right to repel a goalbound shot but the striker reacted quickest to poke the loose ball home. At 2-4 it looked a long way back for BMHHFA but the boys were playing very good football and Nay made it 3-4 with the aid of a big deflection. 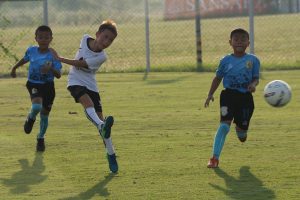 The match seemed destined to end in a narrow Burexnong win with the score standing at 3-4 at the end of normal time. But BMHHFA kept getting in dangerous positions with wingers Nick and William leading the charge and centre half Alex popped up to crown a fine performance with an injury time equalizer.

The goal sparked wild celebrations on the touchline but was no more than the player’s deserved. From the boys who played the full 40 minutes, like William, Nick and Sam, to the substitutes who came on and made an impact like Singtoh, Michael and Danny every single player played their part.

There’s still a lot of room for improvement in terms of passing, movement and positional sense. But this was a well deserved draw an a fantastic way to finish the first ever home game that the Under 10 team has played. 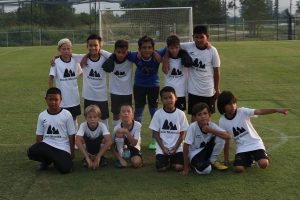